There is a statistic bandied around that 7 our of 10 change projects fail!!! The current research indicates that the range is between 10% success rate (9/10 fail) and 50% success rate. Anyway you examine the findings, there is ample evidence that the change initiatives are far more likely to fall short of their stated objectives than to reach their promised outcomes.

According to the Victorian 2011 People Matter survey ( a public service organisational climate survey), organisations performed their poorest with respect to managing change. Compared to 2010 results – 34% – things are getting worse not better!

Remember that probably 80% of change management is about the people, and only 20% is about the process?  In the main, leading change is about understanding where people who are affected by the change sit of Roger’s Curve of Innovation, and what would motivate them to move to the left and become early adopters, or even innovators, or at the very least, part of the early majority.  And much of this is about how they think about change – their mindset! 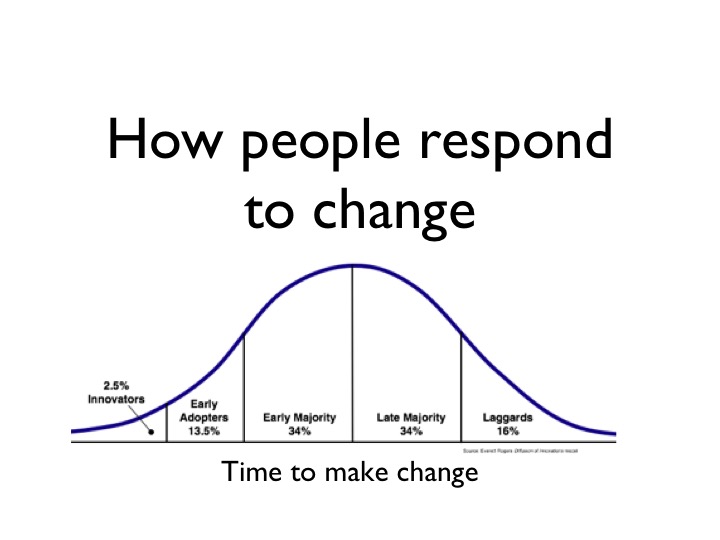 Why do people resist change?

Another reason for people to resist change is that they are attached for some reason to the status quo.  Is it possible that they were responsible in some way to the current situation?

In any case, to avoid or to overcome resistance to change, you are well advised to start where they are and understand what the change means to those who are affected, and how you might be able to address their fears or attachments.

Consider the people who might be affected by your proposed change.

Why are they there?

If they are likely to be late adopters or laggards, is it because they are worried about the change or attached to the present?

If they are attached, what might they be fearful of loosing?