In an important sense, culture is the sum total of how the individuals think in the organisation.  So we can apply the S + T = R concept to organisational culture.

If you were to administer a cultural diagnostic tool, like the LSI Conflict tool, to all individuals in the organisation and ask them to complete it from the perspective of how they are expected to think and act in response to conflict and differences of opinion, you would get a pretty good picture of your organisation’s cultural response to conflict.

Human Synergistics has created a way of assessing cultures in terms of 12 styles that fall into the following broad categories (Organisational Cultural Inventory – OCI):

Constructive cultures  – in which people are encouraged to interact with each other and approach their tasks in ways that will help to meet their higher order satisfaction needs to improve and grow (includes self-actualising, humanistic-encouraging, affiliative and achievement). They are driven to self-improve (win-win).

Passive/defensive cultures – in which people believe they must interact with each other in ways that will not threaten their own security so they tend to agree or avoid any conflict (approval, conventional, dependent and avoidance).  They are driven to self-protect (loose-win).

Aggressive/defensive cultures – in which people are expected to approach tasks in forceful ways to protect their status and security (oppositional, power, competitive and perfectionistic).  They are driven to self-promote (win-loose). 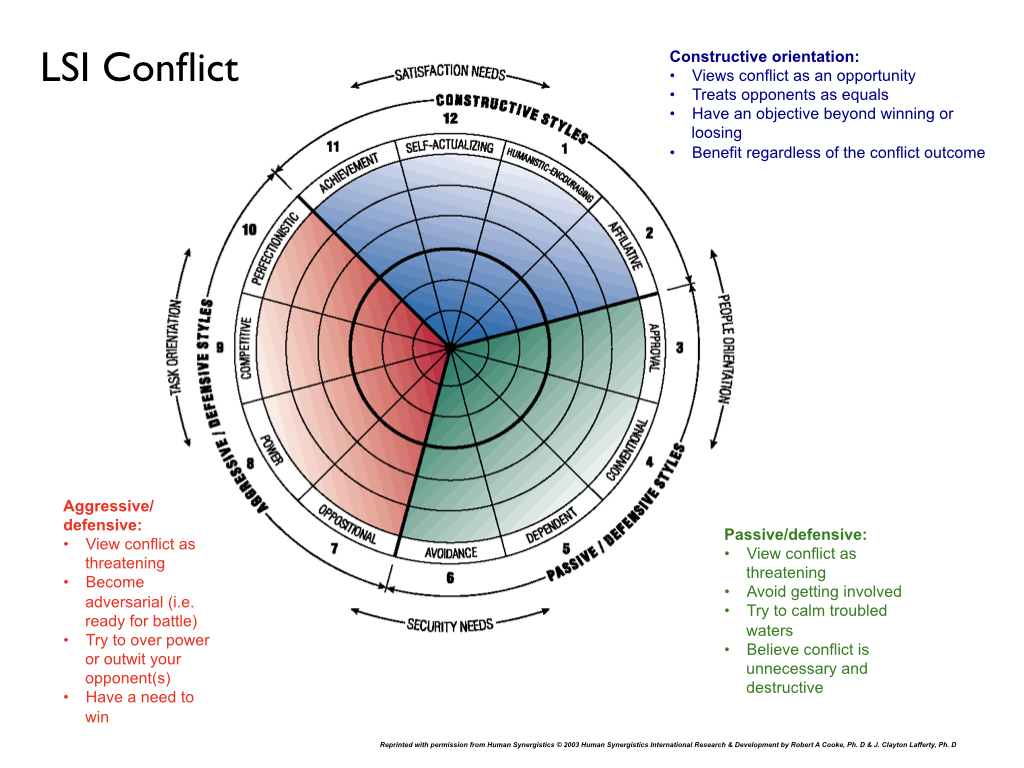 Organisations usually have a bit of all 12 styles – some have more than others – and this gives us a clearer picture of the predominant culture.   However, the more constructive an organisation’s culture is, the better it performs on individual team and organisational outcomes – the more constructive and collaborative it is.  Differences of opinion are more likely to be encourage and result in innovation and growth, and less likely to result in negative conflict.

The following diagram shows the aggregate OCI results take by a range of hospitals across Australia and New Zealand.  Almost every industry has a profile and it is worth connecting with Human Synergistics to fine out yours. 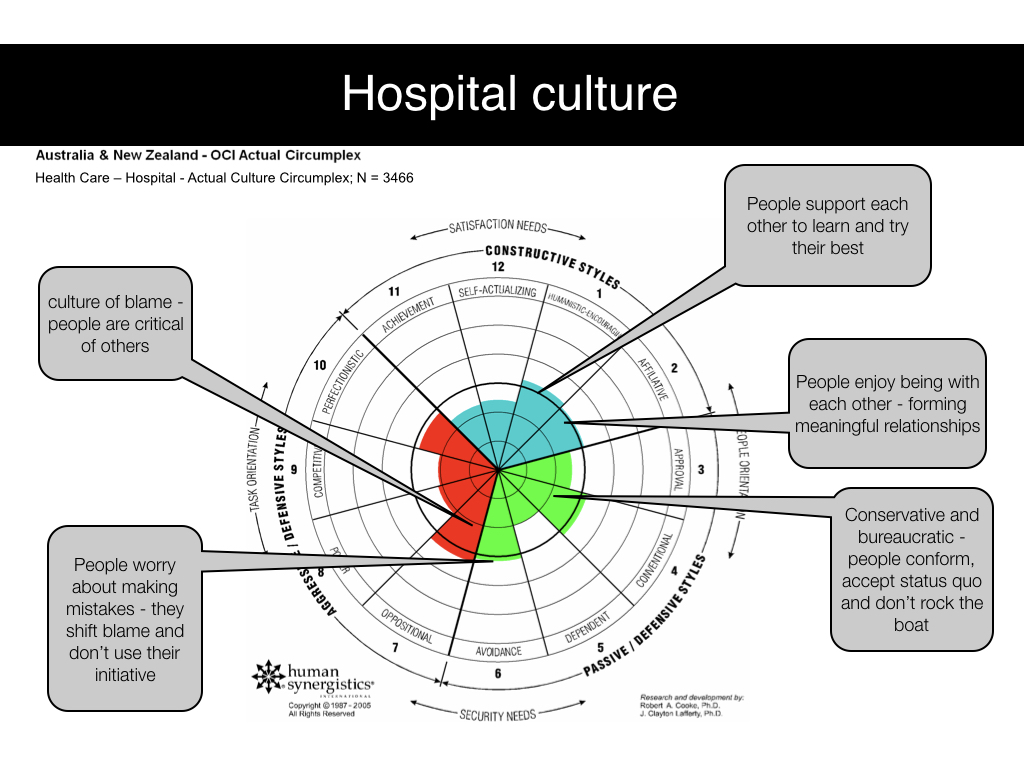 What do you notice? How does it compare to your organisation? The culture has high levels of oppositional, avoidance and conventional styles.  Let’s have a closer look at these:

Oppositional
Oppositional cultures encourage people to be critical of each other, to find fault and punish mistakes.  This behaviour actually prevents the creation of a culture of safety.  Other’s have also found that in the hospital sector there is a culture of blame, or a ‘lack of a ‘just culture of safety” which actually drives errors underground and creates unsafe environments (Burke 2005 cited in Scott-Cawiezell 2006).

The evidence shows that cultures of safety foster open communication about concerns and things that go wrong so that we learn and can improve our practice and the systems (Scott-Cawiezell 2006).

Avoidance
Also related to how people are treated when they make mistakes, being punished will invariable stop people from trying new things or using their initiative.  They will avoid doing anything until told.

People in avoidance cultures tend to shift responsibilities onto others.  I have heard in many health and aged care organisations staff declaring: ‘that’s not my job’ or ‘that’s not my patient’.  They might put things off and not raise concerns about patient safety.  They tend to avoid conflict or withdraw from it rather than addressing it

Conventional
There will be a tendency for people to just follow the rules, even when these do not work or create conflict and confusion.  People might not attempt to deal with their interpersonal conflicts believing that their manager should do this instead according to some set of rules.

These three styles of culture get in the way of supporting people to be the best they can be and to make the changes needed to create a safe, collaborative and innovative culture.

So how do you define the culture so that it fosters constructive difference and collaboration?

The most influential people have a powerful affect on the culture and how everyone else behaves.  These are the people that others listen to.  They are the opinion leaders which are not necessarily the formal leaders!  If the most influential people tend to avoid conflict or conversely dominate and escalate conflict, then you might find that everyone else seems to behave in more passive or aggressive ways to conflict as well.

Using a flip chart, engage your team in a process of identifying (you could scribe, or they could write their ideas on post-it notes):