The conflict in workplaces can often come down to this interchange between emotion and work. It may start with role confusion in a real sense, people not being clear about their roles at work. Add to this the emotional and often unspoken needs people have for validation and, security, esteem and affiliation – all of which they seek to satisfy through their work.

In this way, the work they are employed to perform becomes inextricable linked to their emotions, their esteem, their identity and their sense of self. So when conflict occurs in work situations it is often difficult to unpick the work issues from the personal and emotional issues. People take work and work interactions very personally.

When people can’t separate their emotions and their work, and have no other more constructive strategies for doing this, they often turn it into a ‘drama’ and adopt a role from the drama triangle – a role that will validate their feelings and make them feel a sense of ‘rightness’ – that they are right in a difficult emotional interaction. 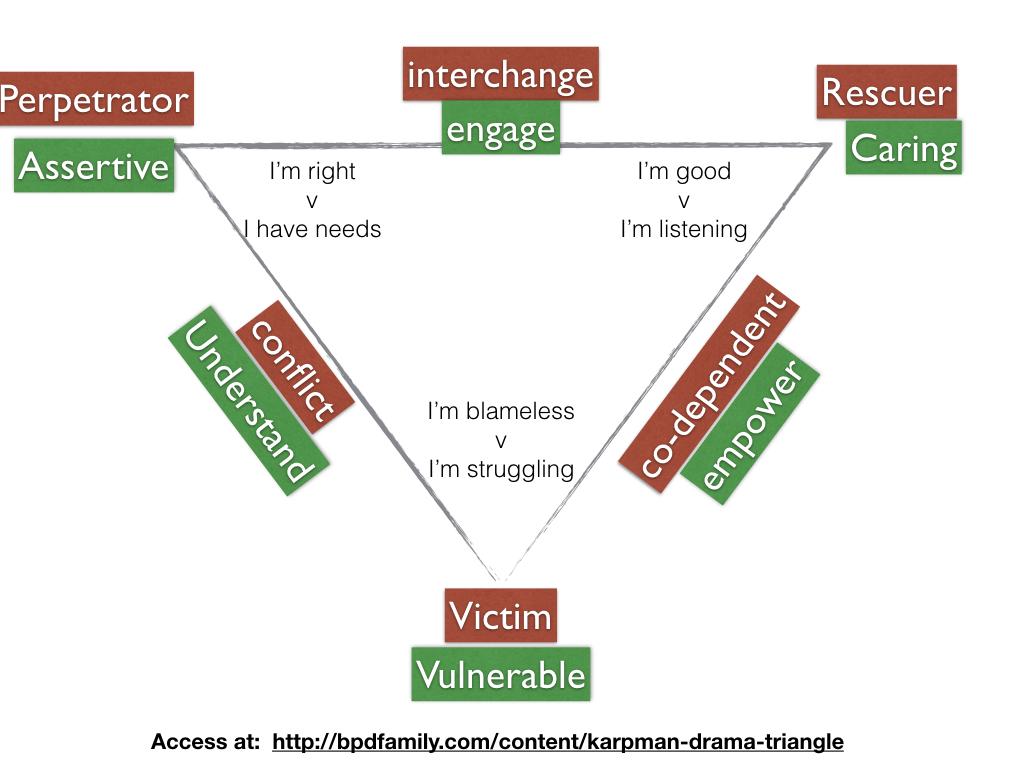 Karpman’s Drama Triangle, developed in 1968-1972 by the psychiatrist, Dr Karpman, is based on transactional analysis psychology which says that our “behavior and social relationships reflect an interchange between parental (critical and nurturing), adult (rational), and childlike (intuitive and dependent) aspects of personality established early in life.” Karpman said that the Drama Triangle comprises the following 3 roles which people adopt in a ‘drama’ or conflict:

The Victim – This is not literally a victim.  Rather they are feeling or acting like a victim. The victim sincerely feels victimized, oppressed, helpless, hopeless, powerless, ashamed, and seems unable to make decisions, solve problems, take pleasure in life, or achieve insight. The victim’s stance is “Poor me!”

The Persecutor – The persecutor is (or is perceived as) controlling, blaming, critical, oppressive, angry, authoritative, rigid, and superior – self righteous. The persecutor insists, “It’s all your fault.”

The Rescuer – The rescuer is a classic enabler. The rescuer feels guilty if he/she doesn’t rescue. Yet his/her rescuing has negative effects: it keeps the victim dependent and gives the victim permission to fail. It also keeps the rescuer stuck in focusing energy on someone else’s problems, not solving his/her own. The rescuer’s line is “Let me help you.””

The problem with the Drama Triangle is that every single actor in this interaction will believe without a doubt that they are right which means that no resolution can be found – as no change can be made without stepping out of these roles.

Every conflict presents an opportunity to grow and become more self-empowered.

As the diagram shows, the solution is for one or all actors to step out of the drama and if they are:

The persecutor – articulate their needs and expectations clearly and respectfully, treating the other person as an adult, not a ‘naughty child’.

The victim – clearly and confidently articulate your situation and how you are feeling about it – where you are struggling and what you need to move forward.

The rescuer – Rather than come to the rescue, wait until you are approached.  Don’t give them your solutions or suggestions until they are asking for them.  Instead, listen and ask questions like a powerful coach or mentor would, until they have come up with their own solutions and path forward independently.  This is the key to empowering others – do not take this opportunity for them to learn and grow away.

What role have you recently played?